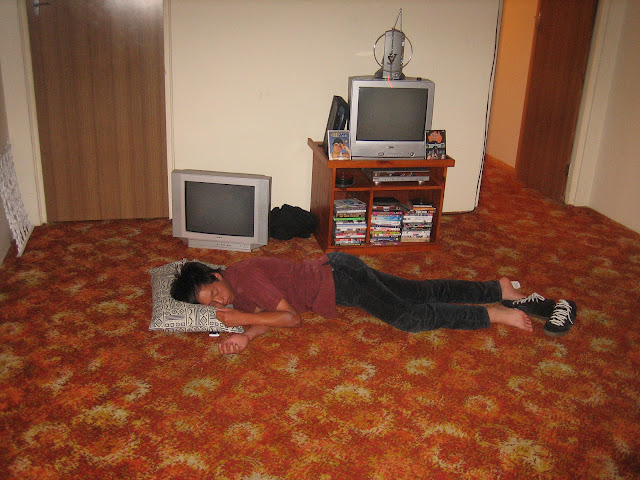 Firstly I would like to state that I dont think Nathan has received the praise he deserves for all the videos he has released over the last 10 years. Now that he is living in Japan it saddens me deeply to think that there may not be another coming out in the near future. Nathan is a very humble, wise young man who has a degree in teaching and now practices as a Clairvoyant Healer. By far one of the biggest characters I have met during my years of skateboarding and im proud to say one of my best and loyalist friends to the end.
When I met him a skin head kid we use to skate with nick named Nathan Gook (a racist Australian term for asians), somehow the G got dropped and it has stuck ever since. Ook is not a naturally talented skateboarder by any means but if u have ever witnessed him on board or on the drink you never know what to expect from the cheeky young man. His parts are always incredibly entertaining and an inspiration. Basically it sux not to see the guy anymore so I thought I would do a little interview with the man now going by the name as NathanStar.

Ho man how's life in Japan? What does you day to day life consist of?

"Life in Japan is great! Well I am living in Okinawa, which is like the tropical part of Japan. Really cool place - lots of beaches, nice weather, and more relaxed compared to the Japanese mainland. Definitely a different lifestyle here though.
On a day to day basis, I'll be the first one up at around 6am. I'll do some Yoga, meditation, writing and practice some Wing Chun. I'm settling into the Man of the Home role, so I'll wake my Fiancee and Step-Son up around 7am and get breakfast ready for them.
I work three days a week as an English Teacher and Technology Teacher at Okinawa International School. We teach all our classes in English and I learn Japanese from the kids, it's great. On my days off school, I'll be doing the housework, writing, and skating the park, which only just got built about a year before I arrived here. Thank you Angels!
On the weekends I'll hang out with my Fiancee, we'll do family stuff like shopping, going to the movies, and going for walks. I guess I've settled down a bit since we first met!"

so you are engaged, how did you meet your fiancé and when and where are u planning to get married?

"Yep we got engaged on Valentine's Day. My Fiancee and I met in Hawaii in 2011 whilst attending the Angel Therapy Practitioner course facilitated by Doreen Virtue. What can I say? It was love at first sight. I wrote a book about it, and you can check it out via my website link. Anyway, I put in my hours in Hawaii and we maintained our relationship over a long distance, with me visiting Japan every once in a while and keeping in touch via Facebook and Skype. The time apart was tough but we put in the work and we live together now and I'm very happy. We are planning to get married next year. Rage in Sydney? Haha."

Tell us a little bit your clairvoyant healing, are you still practising and how did u get into it?

"Yes I am still practising as a Clairvoyant Healer over here in Japan. I see clients on my days off for face to face sessions and also conduct therapy sessions via Email or Skype. Technology is awesome!
As a Clairvoyant Healer, I work with a client's energy field; I communicate with their Guardian Angels and Spirit Guides to provide insights and inspiration for them, review and release past lives, and balance their Chakras, amongst other things. Here is a link to my website if you'd like to read into it more - http://www.nathanstar.com

As a child, I was pretty switched on to perceptions beyond the 5 senses, and I would see apparitions, dreams were very lucid, and I would have premonitions. My spiritual sight shut down for a while as a teenager, and around the time I was recovering from my knee injury, Yoga was a part of my rehab and from there it opened back up. I had a lot of questions about my life at the time, and I went to see a well known Australian Clairvoyant Healer and was really amazed and inspired from my sessions with her. I trained with her in 2010 and my Spiritual practise is now a very significant part of my life."

What have u told your family here and in Japan about your home made OOK tattoo on your arm?

"Well my family in Oz don't know about it, and only my Fiancee and Step-Son see it. My Fiancee likes my tattoo because it looks a bit like a jellyfish and bubble melted together. Jellyfish and Bubble is a reference to the visions we both saw together the first time we tuned into each other Clairvoyantly. Anyways, tattoos are a bit taboo in Japanese culture and my Mum doesn't like tattoos so neither Mum or Mom-in-law know."

Can we expect to see you living back in Sydney anytime soon?

"Well we are planning on moving back to Sydney within the next two years when my Step-Son finishes Junior High School. We all had such a great time visiting Sydney for Christmas and New Years, and the work and school vibes are waaaaay more relaxed in Oz, so I think it would work out better for all of us."

How many videos did you make and what inspired you to keep on it so religiously?

"I released six videos in the OOK Vision saga, and half finished Menookmati, the seventh instalment. I was inspired by going out skating with all my friends and being able to capture all those moments. It just kept going, year after year, and It was a good way to document our progression in our skate scene and have fun along the way :) "

Im loving your little Japanese self filmed clips! any plans for anymore videos?

"Thanks! I am having fun filming via bag-cam, where my camera sits on top of my bag. Although the filming might look static, I'm interested to see how well footage can turn out whilst being filmed on the ground on my bag.  Funnily enough, a guy at the bowl saw the way I was filming and he offered to film for me. I kindly refused his offer though.
Currently, I'm taking a little break from filming and editing while I am here in Japan, but George Kosoulous is making a video, so I have been filming a few things for that. It's fun to skate with George and I like the way he puts his stuff together!"

well on an ending note have you got any words of wisdom?

"Make time for what you love and who you love, and remember to include yourself! Enjoy what you do, be passionate about it. Passion speaks the songs of the soul. Namaste O:) "

The best online shopping destination for skateboards and its accessories.